The local government of Quezon City awarded its top corporate taxpayers, including DMCI Homes in the Contractor Category, during a gathering of business owners and executives whose company efforts in the past year have contributed to the growth of the city. The 2012 QC Business Night also recognized pioneering business locators as part of the city’s 73rd Foundation Month Celebration at the Elements at Centris, Quezon City.

The occasion was led by Mayor Herbert Bautista who lauded the transformative support of business awardees in the fields of finance, shopping, export and import, retail and wholesale, information technology, among others. Mayor Bautista expressed confidence that Quezon City can become the next 3G City or Global Growth Generator based on the performance and prospects of its key business sectors.

Quezon City is the site of DMCI Homes’ numerous residential developments located in areas including New Manila, Fairview, Visayas Avenue, E. Rodriguez, Tandang Sora, and P. Tuazon that help generate economic activity and employment while complying with the city’s green building ordinance. Additionally, DMCI Homes’ expertise in engineering quality homes for middle-income families is being applied to improve the lives of many families in Quezon City by providing assistance for the construction of Bistekville, a housing project aligned with the company’s own corporate social responsibility objectives.

This is the first year that the QC government is highlighting the contribution of companies that are not only top taxpayers but are also actively engaged in the social responsibility programs of the city. In previous years, the awards were focused on the highest taxpayers but the new guidelines are envisioned to emphasize good governance and encourage new business players in the lead up to the city’s 75th anniversary in 2014.

According to Treasurer Edgar Villanueva, their vision for QC is good governance. “We should always remember that good governance starts if there’s good tax collection.” The Bureau of Local Government Finance declared the city’s collections in 2011 as the highest it has attained since 2008. He also mentioned the citation that QC received four years ago as one of the top 10 Asian Cities of the Future in an Asia-wide survey geared toward investor markets.

Maricar Encarnacion, Senior Project Development Manager, replied, “We are grateful to the city government for the honor, and at the same time humbled by it because we are in the company of prominent firms that were also given the distinction. This motivates us to strengthen our engagement in communities and cities where we belong. We share in Quezon City’s drive for effective governance. Good governance benefits us all so it’s a goal and a task worth our participation.” 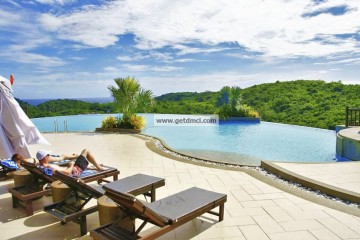