Parañaque City’s housing project for informal settlers along Parañaque River got another boost from DMCI Homes when the property developer turned over to city officials P14.7 million in new cash donation to fund the building of more homes for poor residents.

DMCI Homes President Alfredo R. Austria turned over a check replica of the company’s latest donation to the city to Mayor Edwin Olivarez after the ceremonial signing of the memorandum of agreement (MOA) for the Bagong Parañaque Housing Project at the Parañaque City Hall on Jan. 8. Non-profit organization Habitat for Humanity Philippines (HFHP) led by its CEO and managing director Charlie Ayco, HFHP’s partner in implementing the project, South Metro Manila iHOME Foundation led by its president Manuel Erni, and other DMCI Homes and city officials witnessed the signing and turnover ceremony.

“We are very happy to be part of this project for the underprivileged. We feel it is part of our responsibility to do something for them,” Austria said of the city’s housing project for riverbank settlers located at a 4.2-hectare government property along C5 Extension Road in Barangay La Huerta.

Mayor Olivarez thanked DMCI Homes, HFHP and iHOME for helping the thousands of underprivileged people of the city.

“DMCI Homes continues to support our priority project to transfer settlers in the riverbank to decent homes. Hopefully this donation should not be the last but the beginning of our long partnership,” Olivarez said.

The mayor said helping the relocation of the riverbank settlers will also help the city clean up the Parañaque River.

Ayco thanked the city government and DMCI Homes for continuing to trust the HFHP in implementing the housing project.

“The mission of Habitat is to have a world where everyone have a decent place to live. For Parañaque, it is the dream of Habitat that every person in the city will one day live in a decent house,” Ayco said. “One day, we will be proud to say that there is no more squatter in Parañaque.”

“With this project, we hope to alleviate the living condition of Parañaqueños,” Erni said.

The P14.7 million donation will fund the construction of at least 100 additional housing units in a nearly 11,000-square meter portion of the project site. Ayco said HFHP and iHOME plan to start the construction this month.

Senior Vice President for Finance and Operations Ramil Lombos said it is the second housing project of DMCI Homes with the city government and it will not be the last.

“It is the company’s vision to extend our help to all the cities where our projects are located,” Lombos said referring to condominium communities DMCI Homes built and is building around Metro Manila, including the Arista Place in Barangay Sto. Niño in Parañaque City.

DMCI Homes also donated P9 million to the city government last year for the construction of housing units by the District 3830 Rotary Homes Parañaque Foundation and the non-government organization Couples for Christ Answering the Cry of the Poor at the same site.

The city government is targeting to build 700 houses for the benefit of all riverbank settlers, according to Mayor Olivarez. There are already 70 houses built at the site with 52 units currently under construction.

DMCI Homes’ support to housing projects for marginalized families in Metro Manila is part of the company’s corporate social responsibility program dubbed Kaakbay. The  leading developer of premium resort-themed communities, DMCI Homes, also donated about P4 million to the Quezon City government last year for the construction of houses at Bistekville 1, where poor families living in Barangay Payatas will be relocated.

The HFHP is implementing the Bistekville 1 project. Ayco said construction of houses at the site will be completed and turned over to beneficiaries this month. 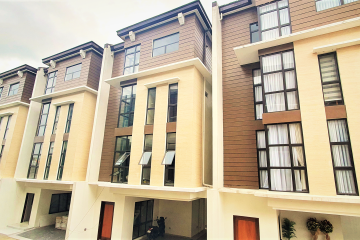