About three years ago, some 600 families living within the outskirts of Barangay Marcelo Green in Parañaque could only dream of building their own homes. Today, that dream has started to become a reality thanks to the efforts of Mayor Edwin Olivarez and various community building organizations like Gawad Kalinga (GK).

Earlier this month, Mayor Olivarez together with representatives from Gawad Kalinga and the beneficiary families received over P21 million donation from DMCI Homes, a Triple-A property builder known for creating resort-inspired communities. The donation is for the construction of additional houses in the Manggahan-Kawayanan GK Villages, a 2.8 hectare property situated inside Barangay Marcelo Green in Parañaque.

The said property, which used to be a privately-owned land, was turned over to the beneficiary families more than five years ago through the intercession of Gawad Kalinga, who helped them organize and apply for a socialized housing scheme with the government.

“The beneficiary families who used to live as informal settlers in the area were able to convince the land owner to sell them the land through the government’s Community Mortgage Program (CMP), which allows organized associations of underprivileged citizens to purchase and develop a tract of land under the concept of community ownership,” revealed Francisco Balagtas, head of Gawad Kalinga in Parañaque and Muntinlupa. “We, in turn, helped them develop the land by coming up with a subdivision plan and getting donors for materials that need to be purchased in constructing the houses.”

As counterpart to the donation, the beneficiaries provided ‘sweat equity,’ with family members taking time out to build their own homes. To date, a total of around 300 houses have already been constructed through this scheme, with just about 335 houses needing to be built.

Ms. Eva Abejero, who used to be one of those living in the area as an informal settler and who is now the president of its homeowners’ association, praised DMCI Homes for their support to the project, saying “Ang akala ko, dahil labandera lang ako, hindi na ako magkakaroon ng sariling bahay. Ngayon, pakiramdam ko hindi na ako iba sa kanila dahil may sariling tahanan na ako, may titulo pa. [I thought I wouldn’t be able to build my own house because I’m just a simple laundrywoman. Today, I feel like I belong because I finally have my own house and I own its land title, too!]”

Now a respected Kagawad in their community, Eva toiled long and hard to be able to convince members of her barangay to work hand in hand and spend time for the Gawad Kalinga project. Their reward: the fulfilment of a life-long dream, which is to have a home they could finally call their own.  Upon completion of the project, each of the beneficiary families would get to own a 2-storey house with living and dining rooms at the ground floor and bedrooms at the 2nd floor.

During the ceremonial handover of the check, Mayor Olivarez thanked DMCI Homes and Gawad Kalinga for helping the city government in their housing project for the poor. “It is our aspiration that these informal settlers would have a real home so they may fulfil their dreams and have a better life,” he said.

For his part, Ramil Lombos, senior vice president for finance and operations of DMCI Homes, expressed his company’s desire to share their blessings especially in cities where they operate, saying, “Aside from Parañaque, we have also been coordinating with the local governments in Quezon City and Mandaluyong for similar housing projects for the poor. This is really part of our company’s social responsibility of giving back to the cities where we are. We provide homes not only for our target market but more so for those who are really in need of a home,” he said.

DMCI Homes supports housing projects for marginalized families in Metro Manila as part of the company’s corporate social responsibility program dubbed Kaakbay. The triple A property developer also donated about P4 million to the Quezon City government in 2013 for the construction of socialized housing for poor families of Barangay Payatas. 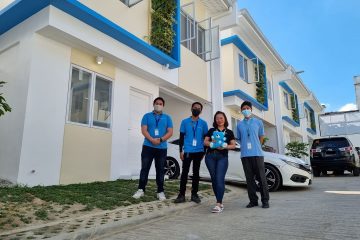