Noemi Reyes / November 6, 2013 / 0 / 3.5k
0
ORDINARY Filipinos may not even be aware of the long and colorful life of this particular 90-year-old civil engineer, but they are certainly reaping and enjoying the benefits of his many achievements. After all, one of his companies built world-class, renowned and landmark buildings—from the Tower One and Exchange Plaza in Makati City, the Cultural Center of the Philippines in Manila to the Sultan of Brunei’s palatial residence. His isn’t a household name unlike popular celebrities, politicians, and tycoons— some of whom are even his contemporaries—but the Philippine infrastructure landscape has definitely been improved in one way or another by the many products and services of the network of companies that bear his name. 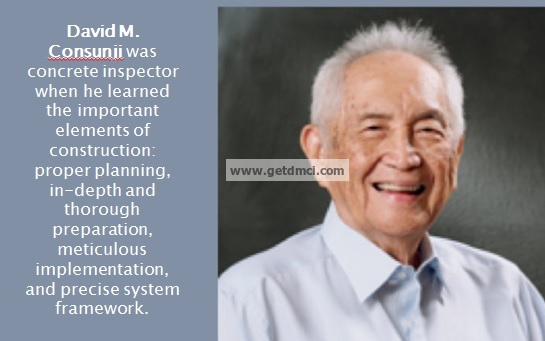 His name is David M. Consunji, and in the company of esteemed friends and family, he recently celebrated the important milestone of his 90th birthday. His is the name behind DMCI Holdings, the parent company of leading engineering-based firms such as D.M. Consunji Inc., DMCI Homes, Semirara Mining Corporation, DMCI Mining Corporation, DMCI Power Corporation, and DMCI MPIC Water Company, Inc. (Maynilad Water Services), a 45-55 consortium with Metro Pacific Investment Corp., among others.

Indeed, David Consunji is one of the few understated self-made Filipino engineers who was able to harness engineering and technical know-how to a large extent in building a business empire. His works and accomplishments are indeed worthy of accolades, yet this inspiring person behind the country’s progress remains low-key. He still continues to build his legacy through his children, employees, and the communities he is serving.

Consunji, who founded his eponymous construction company as a 33-year-old concrete inspector in Pandacan, Manila in 1954, certainly didn’t think that he would eventually land on the list of highly-admired Filipinos today back when he was just building chicken houses for the Bureau of Animal Industry.
After DMCI’s first project, the company soon got the attention of big developers and major businesses needing to come up with grander projects—corporate headquarters, landmark edifices, highways and bridges, commercial as well as industrial buildings all over the Philippines.
A key business tool that helped DMCI Holdings to succeed is its people’s deep engineering expertise.
“First and foremost I am a civil engineer and I love to build. I may demand perfection but I also value speed and technical knowhow as on-time delivery and quality workmanship are valuable in my profession. I guess I was able to impart these traits to my people as we ventured into other endeavors,” explained Consunji.

Consunji, who finished his degree at the University of the Philippines, considers himself prudent when it comes to dealing with concrete, a vital component in the field of construction. What distinguishes Consunji from his peers is his relentless search for perfection and new ideas. Not content with the quality of existing building materials, he pioneered the employment of precast, pre-stressed and high-strength ready mixed concrete.
With his life-long yearning and enthusiasm to build, Consunji found himself in almost every “major” or “landscape-changing” construction project in the Philippines as well as in select places abroad.